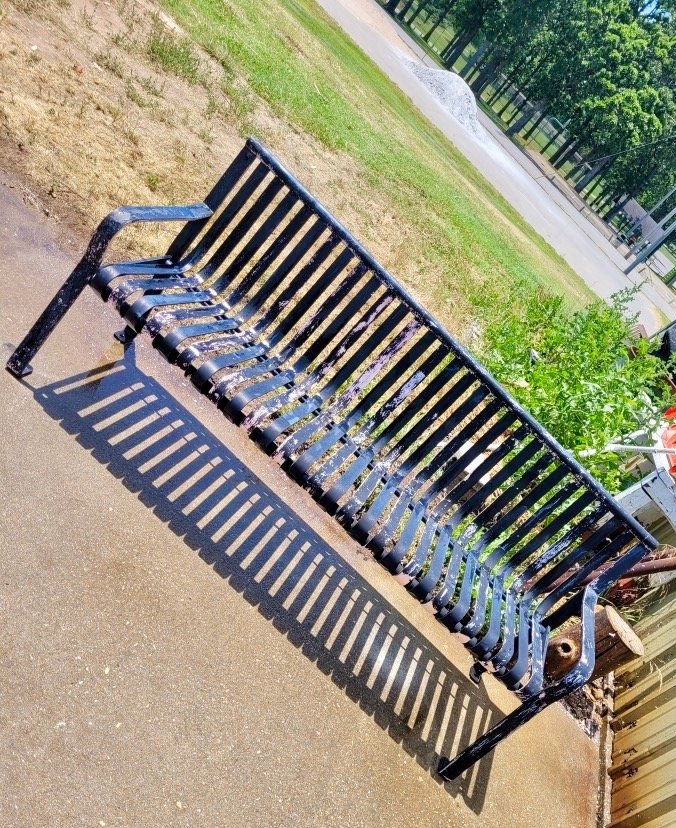 Pictured is the bench Truitt painted as it is being restored to its original state in a different location. The bench could not be restored on the sidewalk in its original location because the paint could have damaged the concrete sidewalk below it. The restoration process was too complicated to do on site. 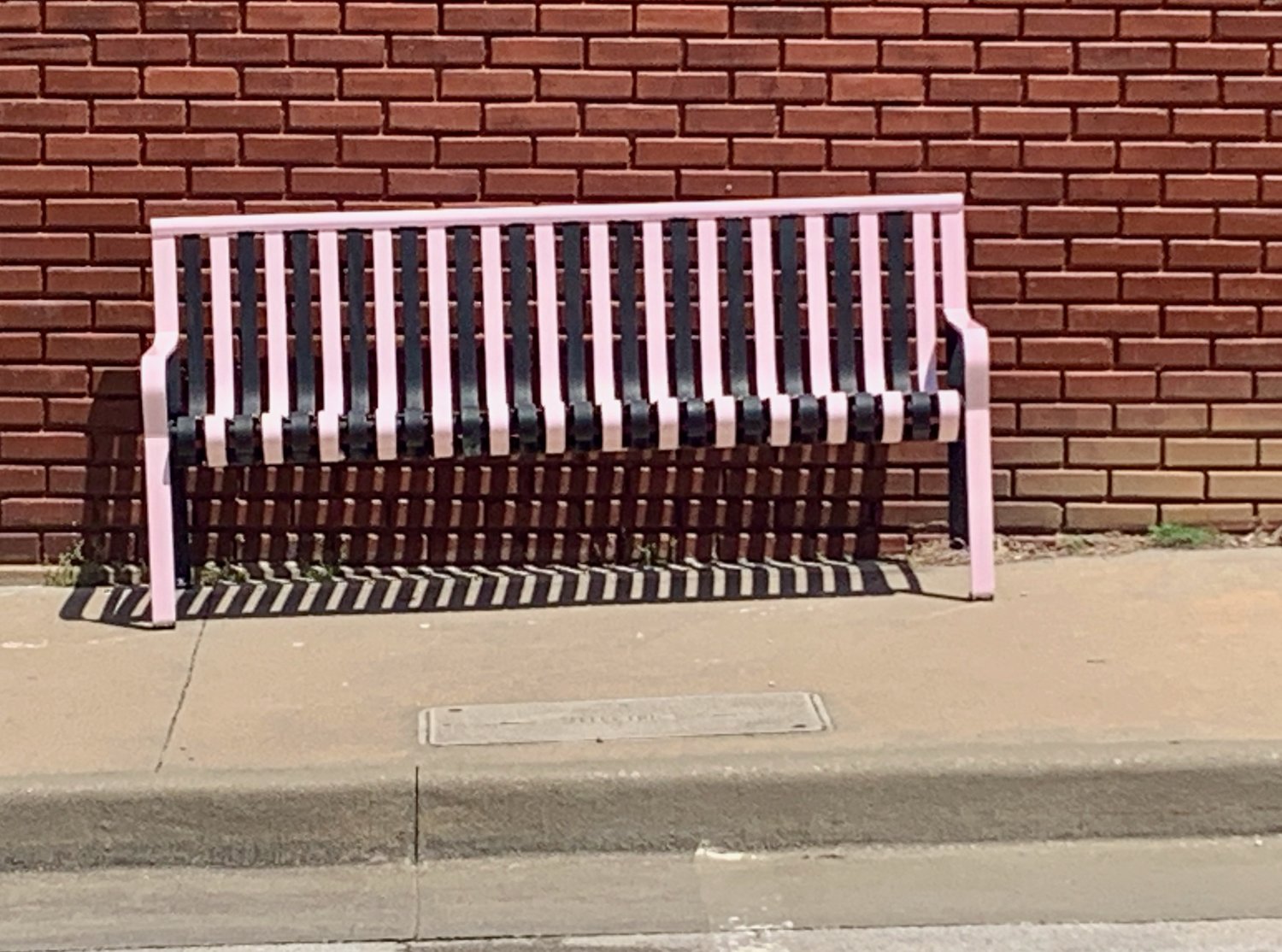 Pictured is the bench that Truitt allegedly painted in May.
Previous Next
Posted Wednesday, September 14, 2022 11:29 am
By Pat Hindman

“I can’t win or lose on this,” Jarrod Schiereck, Chief of Police of El Dorado Springs, said regarding a recent citation of tampering issued to Kathie Truitt by the police department for painting a city-owned bench at the intersection of East Spring and North Main Streets.

The citation has caused a stir with public opinion splitting on the situation.

The date of the tampering, according to the municipal ordinance filing, occured on May 25. Truitt allegedly admitted (and admitted online) to painting a city bench near her downtown shop, The Hillbilly Debutante.

Truitt allegedly painted pink lines on the bench without permission from the city.

However, that bench — along with several benches in downtown El Dorado Springs — were purchased with grant money around a decade ago. They’re all painted a uniform black color.

Both Truitt and the city have declined to comment due to case being a legal matter. Truitt’s attorney has requested a jury trial and a change of venue to Stockton’s municipal court system.

“The police department was likely not brought into this right away,” ESPD Chief Schiereck said. “However, our position was to investigate it once it comes to our attention. …. When we get involved, we investigate just like we would have when we would have been there on the scene.”

The city’s parks and grounds department had removed the bench several days before the police arrived there. Schierreck said the request for the investigation came from the city.

“Mrs. Truitt deserves a fair trial without anything being tainted so all information can be presented not only by the city, but also by Mrs. Truitt,” Schiereck said.

El Do citizen Justin Johnson, who said he’s built several benches for the company that fabricated and powder coated the alleged bench in question, noted that it would’ve been costly to restore the bench back to its original black color.

“I do know that if you paint over the bench after it’s been powder coated and want to ‘refinish the bench to its original state’ … you are going to have to sandblast and re-powder coat the bench, which is not something most people can do in the backyard or garage, per say,” Johnson said.

This procedure can be costly with labor and cost to powder coat – “you could be looking at $500,” Johnson said.

El Dorado Springs City Council meeting minutes indicate the cost of this refinishing this bench adds another layer to this particular crux of the matter.

At a July 5 city council meeting, councilman Nathan Murrel asked if Truitt would be willing to pay part of the expense for restoring the bench to its original condition. Truitt indicated that she would.

According to certified meeting minutes, there was a considerable discussion at the July 5 El Dorado Springs City Council meeting on how to handle the issue prior to the ESPD issuing a citation.

Per July 5 meeting minutes, Truitt addressed the council about the bench and two unrelated community concerns. Meeting minutes ultimately say that councilwoman Gabby Kinnett commented she thought the situation was handled incorrectly. Councilman Jimmy Luster said it is a “police matter,” and the Council “should have nothing to do with it at all.” On the other note, councilwoman Glenda Baker said she felt it should have been handled sooner.

Kinnett commented that rules are rules.

At this July 5 meeting, Rogers told the council that on the day of the bench painting incident, he instructed park employees to remove the bench and restore it back the original condition to preserve its original layer of paint and protect the pavement below it from paint damage.

Kinnett indicated that she felt the police should have been called at the time of the tampering. Rogers mentioned that a letter could be sent to Truitt for the cost and repair of the bench, as of now the cost is around $450-$470, according to meeting minutes.

Mayor Cory Gayman asked if it was too late, and Baker indicated that if Truitt paid for it, the Council should “move on,” minutes say. Luster questioned what would happen if Truitt did not pay, and Baker said she thought it should not be dragged on any longer.

At the July 5 meeting, Gayman asked what the fine would be. Rogers said he was unsure and would have to check. Luster said he would like the police should handle it. Gayman felt there should be a fine and restitution, and Kinnett felt she should be fined. The matter was not voted on, per meeting minutes.

A few days after the July 5 council meeting and after the citation was issued, Rogers said a check in the amount of $470 from Truitt was dropped off at city hall. He was told the check was to reimburse the city for the restoration of the bench.

Rogers said the check was returned to Truitt with a letter, which states El Dorado Springs City Prosecutor Blane Baker advised the city to return the check back to Truitt because the actual amount to restore the bench to the original condition was not yet known at that time, and once a summons was issued, the City Prosecutor and the Municipal Court would hand the adjudication of the case.

The case itself is classified as a municipal ordiance violation — not a misdemeanor charge or infraction. Although Truitt faces a fine of up to $500 or up to three months in jail, the latter rarely occurs for a municipal charge of this nature.

Truitt appeared in Stockton’s municipal court on Thursday, Sept. 8, and pled not guilty. Her case management conference is scheduled Dec. 8. 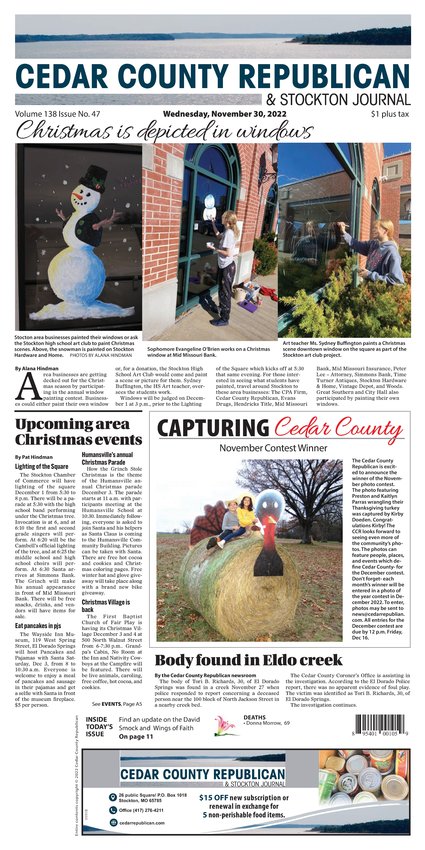