The Cedar County Memorial Board of Directors met on Wednesday morning, Dec. 1, to discuss how a recent preliminary injunction against the Centers for Medicare and Medicaid Services’ vaccine mandate would affect recents decisions made by the Board —  including the Wednesday, Nov. 17, decision to give the Cedar County Commission notice of the Board’s intent to turn responsibility for the Cedar County Health Department back to the Commission in 90 days, or quicker if possible.

With the preliminary injunction now in place, the CCMH Board voted on Wednesday morning to suspend its policy and actions which were put into place to comply with the CMS rule.

The majority of Cedar County Health Department staff members have rescinded their resignations due to the temporary injunction.

The Monday, Nov. 29, injunction was issued by the U.S. District Court for the Eastern District of Missouri. The order was entered in response to a challenge filed by 10 states, led by Missouri Attorney General Eric Schmitt.

The order prevents the Sunday, Dec. 5, deadline for health care workers to receive at least one dose of a COVID-19 vaccine from taking effect only in the ten states that were a party to this suit, including Missouri, and delays implementation of the rule in those states until further notice from the court.

The CCMH Board’s decision to give notice to the commission of its inability to have responsibility of the health department was due to CCMH’s inability to staff the Cedar County Health Department after Friday, Dec. 3, as a direct result of the original CMS rule.

“CCMH has been working closely with the Missouri Department of Health and Services to plan for continuance of some county health services during the 90-day notice period,” the release said. “However, with the preliminary injunction now in place, the CCMH Board voted on Wednesday, Dec. 1, to suspend its policy and actions which were put into place to comply with the Rule.”

“It is important to note that there is no established end date for the preliminary injunction,” the release said.

The plaintiffs will seek to make the injunction permanent, but it is likely the case will be appealed to the Eighth Circuit Court of Appeals and ultimately to the Supreme Court.

Should the temporary injunction be lifted prior to the end of the 90-day contract notice period ending February 16, 2022, the Commission has informed CCMH they will be ready to take over responsibility for the County Health Department.

The release said the end goal for CCMH and the Commission is to work together to assure continued public health services for Cedar County residents.

“It took the pressure off,” Marlon Collins, Cedar County Commissioner, said. “It gave us a little time to breathe and get our numbers together.”

Collins said the Commission and the CCMH Board will meet at a later time for a transition.

“We are prepared to immediately take the employees over so they don’t have to worry about their jobs," Collins added.

At this time, residents will not have to worry about these services ending as of Friday, Dec. 3, as was originally feared due to the CMS rule. CCMH does want to make sure residents are aware this will not affect In-Home Services, which closed as of Tuesday, Nov. 30, as a result of insufficient staffing. 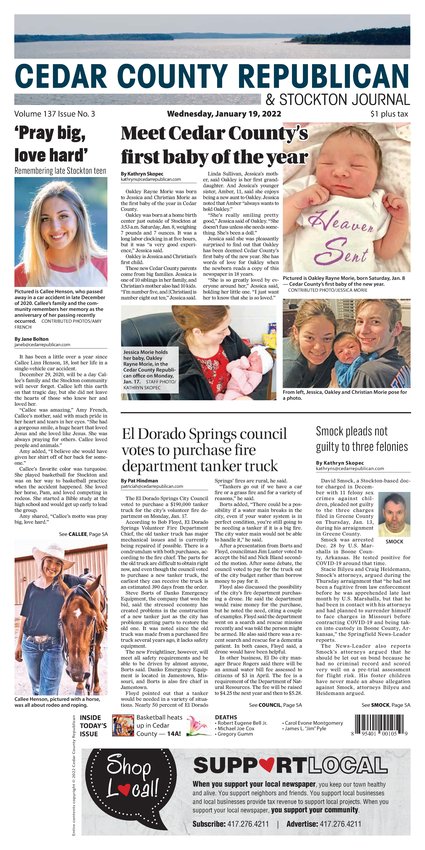